Notwithstanding my update for June’s astronomical events, I’ve been absent for the whole month of May. That is because it’s been a busy month for me. Here’s a bit of an update of what I’ve been up to from April 22 to now.

On April 22, 2015, I delivered my presentation about my experience as an amateur astronomer that day. Throughout the presentation, I talked about the photos I took, honestly, and with a little bit of humour. It was well received by the audience.  I hope to follow that up with another presentation a few years down the line.

On April 28, 2015, I discovered the wonders of BackyardEOS. It’s a program that uses your DSLR camera like a CCD Camera. It was really effective as an imaging device, and as a focusing device. I got a few pictures like this using BackyardEOS.

From May 20-24, 2015, I had the opportunity to volunteer for the International Space Development Conference (ISDC). It was a great experience as I made met many heavyweights in the aerospace industry, gained valuable experience, and made many new friends. I had a great time. In addition, I was able to get this startrails image from the heart of downtown Toronto. I took over 1043 frames to get this image. Each frame were 3” exposure, f/5.6, ISO-1600. It was a long image, but it was worth it. Next year’s ISDC will take place in Puerto Rico. Who knows, maybe I’ll be there…

This image was a difficult one to capture. I needed to balance how much light I would capture, while still capturing the movement of the stars. Too much exposure captured the light pollution of the city. Too little and the stars won’t show up. That’s why I chose 3″ exposure, because it wouldn’t capture too much light, while still capture the stars. f/5.6 to reduce the amount of light pollution captured, and ISO-1600 because we need to capture enough light.

That is what I’ve been up to these days. Thank You for everyone’s support. Sorry for the sporadic blog posts. Keep looking up, you never know what you’ll find up there.

Earlier today, the Armenian Youth Federation’s latest issue of Ardziv was released to the public. It featured articles from various contributors about Armenian Culture, the Armenian Genocide recognition efforts, and other editorials.

For this issue, I contributed an article about the history of Armenia’s involvement in the advancement of Astronomy focusing on two major Astronomers in the Armenian SSR and their observatory. You can find that on Page 15 in the link below.

In addition, I was surprised and humbled to see one of my images used as the cover image for this issue of Ardziv. It is a startrails image I took from my backyard. The image is made up of 516 frames, each frame was exposed for 5″, at f/5, and ISO-1600.

The link to the latest issue of Ardziv is below:

I would like to thank all those who were involved in the production of this issue of Ardziv. Everyone did a great job. I’m happy to see my article published in this issue, and I am grateful that my image was featured as the cover image for this issue. I hope everyone enjoys this magazine.

Keep looking up. You never know what you will find.

On January 28, 2015, the sky was clear, and I took the time to image another startrails image. I aimed my camera at the sky towards Polaris, and I set my camera to image the night sky at 5″ exposure, f/5, ISO-1600. I had stacked over 516 frames to get this image. 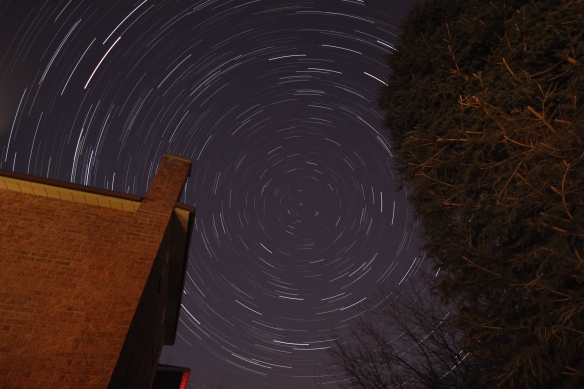 I was happy with this image. Sadly, that’s all I did that night as it was too cold, and I had work the next day. Until the next clear night:

Keep looking up! You never know what you will find up there.