Here are the astronomical events occurring in the month of April: (All times are given in UTC format)

That’s all for this month.

Have a great day, and keep looking up! You never know what you will see up there.

Here are the astronomical events occurring in the month of April: (All times are given in UTC format)

On August 18, 2014, I learned that there would a conjunction of two very bright planets, Venus, and Jupiter. Luckily, it was a clear night, and I decided to stay awake until morning to observe that event.

Around 2 am, I looked around the viewing location, but I wasn’t able to find a good place to view the conjunction. Despite that, I decided to try and observe the event.

At 4:40 am, I began to take my telescopic equipment outside and I prepared my telescope to view the conjunction. I quickly aligned to the Moon, and got it ready to observe.

Looking at the Moon, I see it is a waning crescent, past the last quarter. After that, I noticed that the Pleiades were visible, and I aimed my telescope at it. It was great to see it again with and without my telescope. This deep sky object has an interesting mythology associated with them.

In the most famous myth, there were seven daughters of Atlas and the ocean nymph Pleione: Maia, Electra, Alcyone, Taygete, Asterope, Celaeno, and Merope. They were minding their own business, when Orion the hunter saw them and started chasing them. Luckily, Zeus intervened and turned the seven sisters into stars. Unfortunately, Zeus did the same for Orion, allowing Orion to chase the seven sisters until the end of time. That is why the Pleiades are also called the seven sisters.

After observing that deep sky object, I started to look for the spot where the conjunction will rise. Looking at at the horizon, and comparing it to the image on my phone, I realized that the conjunction will not be visible from where I was. I looked at another location, and I saw both planets rising above the horizon, through the trees. I quickly brought my telescope to that location and looked around for the planets. After a lot of fidgeting, trying to find it through the trees, I saw two dots in my telescope. I took a picture of it, but I wasn’t sure if it was the conjunction. Moving the telescope around, I was able to see both dots clear enough to reveal one of the dots moons. This confirmed that I was, in fact, seeing the conjunction of Venus and Jupiter.

Conjunction of Venus and Jupiter. The planet with the Moons is Jupiter.

It felt great to be able to see a unique event such as this meeting of two planets. I took many pictures of that event using my point and shoot camera. If anyone wants to see a conjunction as well, it’s not too late. There will be two more conjunctions, and both conjunctions will feature three celestial objects.

On August 23, 5:30 am, it will be the best time to see the conjunction of Venus, Jupiter, and the Moon. Here is an image of what it should like provided you have a clear view of the horizon.

One week later, on August 31, at 9:20 pm, Saturn, Mars and the Moon will also meet up really close to each other. Here is an image of what it should like provided you have a clear view of the horizon. 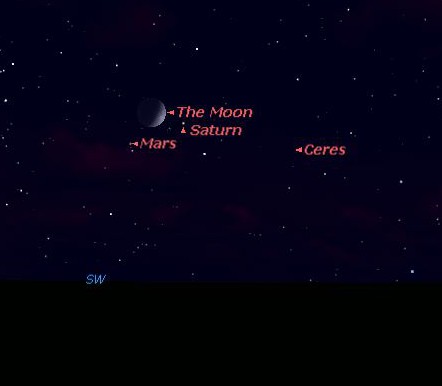 It is definitely worth viewing, especially if you can view the sun at the horizon. After I finished imaging the conjunction, I decided to pack up my scope and bring it inside. Once that was done, I decided to stay up and watch the sunrise.

With a foldable chair in hand, I went to a small cliff near my house, where there was a clearer view of the conjunction, and the night sky. It was beautiful. The factories beyond the cliff were covered in fog, and the rest of the cliff had a stream of fog surrounding it. It felt surreal. I spent an hour there watching the fog come and go, watching the planets hide behind a brightening sky, and watching the sun rise. It was worth staying up to see. After watching the sun rise, I went back home and soon after went to bed.

It was a wonderful night. I was able to see the late night Moon, a mythical set of stars, and the close encounter of two notable and bright planets. As a bonus, I saw the sun rise above the horizon, and bring an end to the night. I encourage anyone that wants to try and observe these night sky objects and events to do so. If you have any questions for me, please let me know in the contact form at: https://jolyastronomy.com/contact-me/

On June 7, 2014, Mars and the Moon were in conjunction with each other being only two degrees away from each other. According to my Clear Sky Charts app, it would be clear before 1 am, therefore I decided to quickly image the conjunction using a camera with a telephoto lens.

I was able to take a lot of images of the conjunction. There was light cloud cover, but it didn’t overtly obstruct the Moon and Mars. I used a variety of exposure settings, and sensitivity settings to try and get the best image. When I found a good set of settings for the image, I took a few frames and their corresponding dark frames to stack them later on. Here are a few pictures I took:

Moon and Mars conjunction. They are two degrees apart from each other. 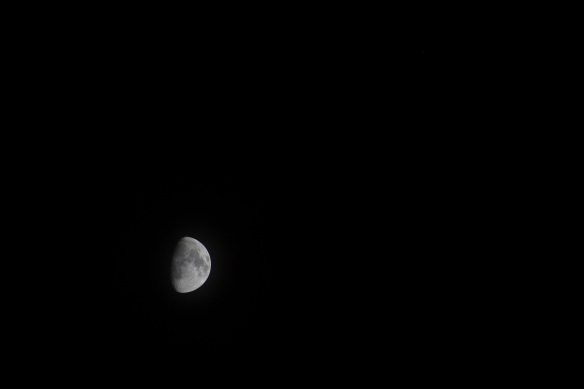 The Moon. It was a split-second shot. The amount of light captured was enough to see the Moon only. Mars was too dim to be captured at that setting.

I set myself up on the driveway, which meant that I attracted the attention of many onlookers driving through the neighbourhood. It was nice that people had an interest in what I was doing. However, one of the most notable moments was when my next door neighbours noticed me looking into my telescope. Two of my neighbours noticed what I was doing, and approached me. I told them about tonight’s conjunction of the Moon and Mars, and what I was doing to image it. I let them look into my telescope to see the Moon and Mars for themselves. They were quite surprised at what they saw. They asked me many questions, relating to imaging these celestial objects, the telescope quality and price, the effects of doing astronomy in the city, and other questions. It was a great conversation. It felt good to show them what I do as an amateur astronomer. After a while, they went back inside. I continued to stay outside and image the sky.

However, I didn’t stay out much longer. As the night went by the cloud cover become more intense, actually blocking my view of Mars. When I couldn’t see Mars anymore, that is when I decided to pack up and go back inside.

It was a really good night. I saw the conjunction of two celestial objects and I showed what I do as an amateur astronomer to my neighbours. It felt good to do that. Hopefully, I can do it again the next clear night.