On September 27, 2014, my father and I drove to Glen Major Forest in Clairmont to image the night sky. The sky was so clear, that we could see the Milky Way ever so slightly.

We quickly set up the camera on a standard tripod. The camera had a 10 mm wide angle lens. After fiddling with the image settings, we decided to take 30 second exposure images at f/4 and ISO 1600.

I set up the intervalometer to take consecutive images for as long as it can. It started imaging at around 10:00 pm.

My father and I left the camera alone to do its work. During that time, we talked about the telescope, and how we can repair the tracking problems. We formulated a plan to fix the telescope’s tracking abilities, and hopefully we will be able to get the best result from that plan.

At 10:52 pm, we checked the camera and we realized that the battery died. As a result, we packed up and drove back home. We came back home with 81 frames to use for the image I had in mind.

The next day, I stacked all the pictures using a program I downloaded from Startrails.de. This program stacks the images that one loads into the program and creates an image. This program doesn’t adjust the image in any way, therefore, it creates what is known as a startrails image.

These images below used two different methods of post processing. For the first image, I used FastStone Image Viewer to convert all the images from .CR2 (Canon Raw File) to JPEG files, which I used to create the startrails image below. 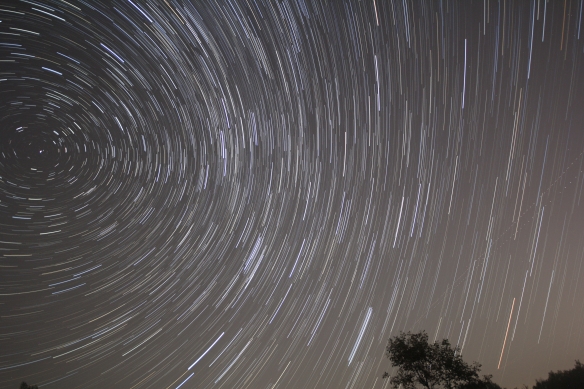 For the second image, I used UFRaw to convert each image into TIFF files, which I used to create the startrails image. This startrails image below is darker than the first image because of how UFRaw processed each image.

In addition, I also made a timelapse video of the stars’ movement in the sky. It felt astounding to see the actual movement of the stars in the video I made.

This is one of the many kinds of images that you can capture with a DSLR camera. The night sky is full of amazing objects and phenomena that always makes the heavens a dynamic place to image.