During the night of August 7-8, I saw the moon in a way that is rarely seen. The moon was a bright orange-red colour in the night sky. At the same time, there were very little stars visible in the night sky, for some reason. It was quite perplexing why, but I decided to not worry about it and to focus on the Moon that night. 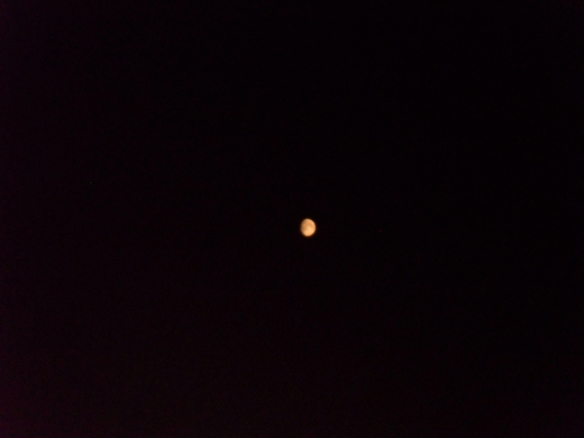 Many months ago, I was working on RASC’s (Royal Astronomical Society of Canada’s) Explore the Universe certificate program. My progress with the certificate stagnated for a while, and after realizing that I didn’t document when and with what I saw each celestial object with, I learned that I cannot use my current observations towards my certificate. Therefore, I had to start over again. It was heartbreaking to start again after working hard to find and observe those objects.

Despite that setback, I found a great opportunity to view this strange, yet beautiful moon. I quickly aligned my telescope to the Moon and I began looking at the features of the Moon. Last time I explored the Moon’s surface features, the moon was a waning crescent, which made it difficult to find all the surface features (mares, and craters) necessary. Here is a link to the previous blog post chronicling that night. During this night, the Moon was coming very close to its full phase, which meant that more surface features were visible and it would be easier to find them.

Since I had done this before, it was easy to find the mariae I found during my previous search, such as Oceanus Procellarum, Mare Insularum, and Mare Imbrium. I also found Crater Copernicus and the Crater Plato. After finding those mariae and craters, I went on to find other features that were in the dark side the last time I observed the Moon in its waning crescent phase. Here is an interactive map of the Moon to follow. 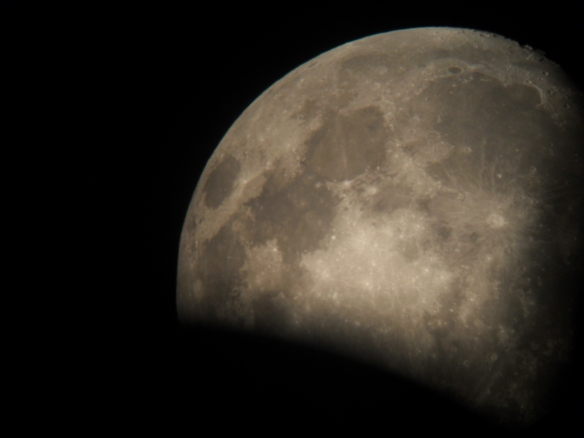 On the Moon, beside Mare Serenitatis is Mare Tranquilitatis, where Apollo 11 first touched down on the Moon. I then found Mare Crisium, which is located North-East of Mare Tranquilitatis. It quite perplexing how all the Mariae’s regolith contrasts with the regolith surrounding the mare. From my research, I learned that the formation of the Mariae started 3.9 Gyrs (Billion years) ago. At that time, the Moon’s crust had solidified and was being bombarded by many asteroids. Then there was a large volcanic event which flooded the plains with magma. It’s unclear why the mariae are concentrated in the near side but one theory suggests that the near side’s crust is thinner than the far sides, which made it easier for volcanoes to erupt at the near side. Another theory suggests that since the Earth and the Moon were closer to each other (10x closer) when they were formed, the hot Earth heated the near side, which delayed its cooling process. Whatever the reason, I’m glad humanity has the opportunity to see the mariae.

After finding many mariae, still not finding enough of the mariae on the list, I went back to Mare Imbrium to look for other mariae. I soon realized that north of the Plato crater there was Mare Frigoris, also known as the Sea of Cold. Looking at my list, I found the required number of mariae on the list for the certificate. I then moved onto finding the required numbers of craters.

It was considerably harder to find the craters on the Moon as most craters, unlike mariae, are not as recognizable, however, I was up to the task. After finding Crater Copernicus and Crater Plato, I found Crater Kepler, which was not on the list. I then found Crater Tycho, which looks similar to Crate Copernicus. In my previous attempt at looking at the Moon, Crater Tycho was hidden in the dark side of the terminator, which divided the Moon between the illuminated and the unilluminated side.

I then found Crater Aristarchus, which was also not on the list. After finding that crater, I was able to find three more craters to complete the requirements of my list. They are Craters Ptolemaeus, Aristoteles, and Posidonius. After finding Crater Posidonius, I finished most of the lunar requirements of my list. It felt great to finally start that certificate again.

Since the night sky was so hazy for some reason, I wasn’t see anything else, and as a result, I decided to pack up my equipment and bring it back to my house. It was a successful night of observing. I saw a beautiful red Moon, and identified many of its features. One thing that made today unique was the hazy red moon. After some research, I realized that the moon was red because of the smoke from the Northwest Territories Wildfires moving down towards Ontario. It was intriguing how events far away can effect us back home.