On Monday, June 9, 2014, the Royal Astronomical Society of Canada (RASC) hosted its monthly City Star Party. This star party took place at Bayview Village Park, where many RASC members came to view the Moon and the planets and any stars that were visible in the night sky.

A RASC Member setting up his newly restored telescope. Used with permission.

When I was there, it was quite cloudy. So much so that it casted doubt as to whether the sky would clear. However, half-an-hour later, it cleared up very nicely. We were lucky that we were blessed with a clear night to view the planets.

Once I saw that the sky has cleared, I decided to set up my telescope. It took a few minutes, but I got it up and running. While I was operating it, a few people came to my telescope and looked through it. I was able to answer any questions they had about astronomy and imaging the night sky.

Doing that, I was also talking to a friend of mine, who also has an interest in Astronomy. I told her about the city star party. At the same time, the International Space Station (ISS) appeared streaking across the night sky. It was very beautiful but not as bright as when I was in Glen Major Park during the May 24th meteor shower. Since I had my telescope, I decided to slew and try to capture the ISS on my telescope. It took a while, but I was able to see the ISS on my telescope zipping by very quickly in the field of view of the scope. From what I saw, I felt like I would be able to make out the shape of the ISS from the telescope. Wouldn’t that be a sight!

ISS flying through the sky.

After viewing the ISS, I went on to view the planets and the Moon. I first slewed to Mars. Like all the other times I viewed Mars, the surface features weren’t clear to me. I then slewed to Saturn, and saw its majestic rings. A few people came to my telescope and checked out Saturn. They were awestruck by its beauty.

I then returned to Mars, but I wanted to zoom closer to it. I borrowed a friend of mine’s 10 mm eyepiece, which will zoom in further towards the planet. However, I had a lot of trouble finding it. One issue I am experiencing is that my finderscope’s base is quite wobbly. It made it hard to find any celestial objects, because the finderscope wasn’t calibrated to my scope for long. I decided to slew back to the moon and calibrate my scope there. After doing that, I slewed back to Mars, and using my friend’s 10 mm eyepiece, I finally found Mars. It was slightly bigger, but no more detailed than before. I soon returned his eyepiece, and continued to observe the night sky.

I then slewed to the Moon for another visitor, and a visitor was amazed by the beauty of the Moon. For the night, I felt like there was a lag on my telescope. I now know that there is a 1 second-long lag on my telescope. I suspect it is because of the Azimuth gear broke down again. It was confirmed by another RASC member, with the same type of scope, who recently joined RASC. As a result, after looking around a bit more, I decided to pack up my scope for the night.

I brought all my equipment to the car, and made sure I didn’t leave anything behind. After I packed everything up, I came back to look at other people’s telescopes. I saw a variety of objects. I saw Jupiter through my friend’s restored refractor. It did a good job magnifying Jupiter. It was beautiful. 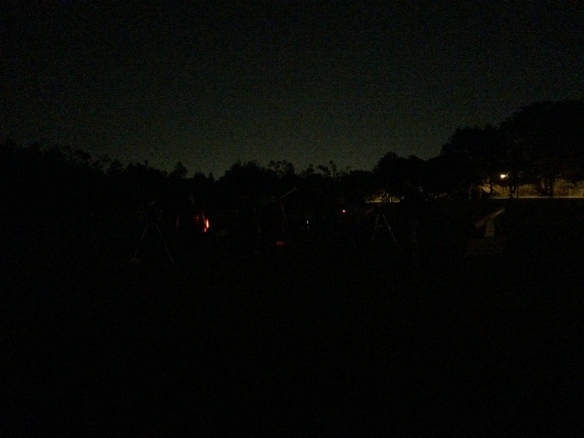 I then went to someone who had a circular telescope. It looked like a beaker. The owner told me it was an Astroscan telescope. Another RASC member came up and talked to the owner of the telescope. It was interesting to hear that this telescope was built in the 1970’s. Looking through it, when it was slewed to the Moon, it magnified it, but compared to my scope, the image was very small, but the quality was really good. I was impressed.

I soon went to another RASC member’s Meade Schmidt-Cassegrain Telescope (SCT). He had attached a binocular adapter to his telescope. He let me look into it, and I saw Saturn, but with both my eyes. With most scopes, you need to close one eye to see through the telescope. However, with the binocular adapter, you can use both eyes to see the night sky. It was interesting to use both eyes to view an object. It might be something worth investing in the future.

I then went to another RASC member’s telescope, and I was introduced to the Double Double, also know as Epsilon Lyrae. It is a multiple star system located in the Lyra constellation. We saw two binary star pairs in orbit with each other. This image of HD 98800 is a good approximation of what it looks like from an up close vantage point:

When I saw that, I was intrigued by it. It is the first double star system I saw. Hopefully I will see more, and try to image them in the near future.

I then went to another telescope operated by another RASC member. He showed a group of listeners how you can visually tell the star’s temperature by slightly defocusing the image. It was quite interesting. Here is an image: (The blue star is hotter than the yellow star) 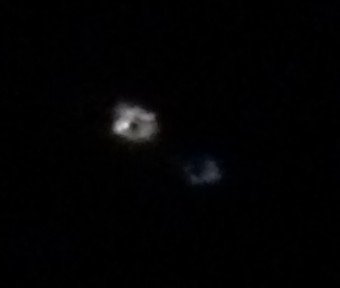 Two stars that have been defocused. The lighter coloured star is cooler than the blue star.

It was very interesting to know that. This means I can look at the stars, and get a good idea of how hot a particular star is. Hopefully I can put it to good use.

I then went to another member’s refractor telescope that was pointed to the ring nebula. I was excited to see the ring nebula in its beauty. Earlier in my hobby, one RASC member told me that we shouldn’t expect much from Deep Sky Objects when observing them visually. I finally understand why. What I saw was the Ring Nebula, but it was barely visible. I was able to see a grey indentation of the ring nebula behind a black sky, but nothing more. I suspect light pollution played a big part in blocking a large portion of this Messier object. Hopefully I get a chance to look at the ring nebula in darker skies.

At that time, the ISS finished an orbit and came back up the night sky again, albeit at a lower elevation than before. It was really nice to see the ISS again. Unfortunately, I couldn’t image it again with my scope as it was packed away.

Near the end of the night, I saw a RASC member with a CGEM EdgeHD Celestron Telescope. It is the top of the line telescope, with excellent optics to view the night sky with. I was able to learn about polar alignment with their mount. There is a recticle there which shows a circle with a smaller circle at the edge of the bigger circle. You put Polaris inside the smaller circle and you get a good approximation of where the North Celestial Pole is. It was interesting to see how polar alignment works in the CGEM Mount. They then slewed to Mars. I hoped they would slew to Mars to test whether their scope has better detail of Mars than my own scope. Unfortunately, it didn’t look much different than my own scope. Maybe it is because of the seeing, or multiple frames need to be stacked before getting any detail. Whatever the reason, Mars is tricky to see and image properly. Before Mars goes behind the sun, I hope I can get a good image of it.

By midnight, many people left with only a few people still observing. I also decided to leave the party at that time, and head home. That Star Party had been a very interesting experience. I saw a lot of new and interesting celestial objects. I also learned a lot about telescopes, and how to use them better. I saw the ISS twice tonight, and I met a lot of new people. Hopefully, the sky for the Dark Sky Star Party is clear and the turnout is as much as the City Star party. Good night and happy observing!