Four days ago, after a series of cloudy and rainy nights, the sky finally cleared for a rare view of the night sky. Taking advantage of that, I decided to take my telescope out for the night and use my piggyback mount.

A piggyback mount is an attachment for telescopes that allows a camera to be attached on top of it. Using the tracking feature of the telescope, one could take long exposure images of the sky for a long time and avoid sky trails, which occurs when a camera takes a long-exposure image of the stars without compensating for the Earth’s rotation. Below is an example of star trails: 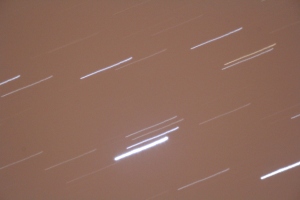 During that night, my goal for the night was to take a long exposure shot of the sky using my piggyback mount. However, I failed to realize that the light pollution in my backyard and the moonlight in the sky would obstruct the view of the stars in the sky, and that seeing conditions for the stars would not be optimal.

An image of Jupiter on a brightly illuminated sky

Light pollution is when artificial light shines at the sky and obstructs the view of the stars. It can come from the car lights, lights from buildings, and especially from streetlights to name a few. Light pollution is most prevalent in urban areas, such as Downtown Toronto, New York, Yerevan, and many other major cities. However, light pollution declines as you move away from the urban centres.

For example, if one was in an urban centre like Downtown Toronto, or Yerevan, and you looked up into the sky, you would likely only see the Moon, the planets, and the odd star. Far out of the city, like in Algonquin park, there is very little artificial light, which will give you an excellent view of the sky, and maybe even the Milky Way.

Light Pollution is a major problem in many cities. However, there are organizations who are committed to reducing the amount of light pollution in our cities. One such cause is: Light-Pollution Abatement Committee operated by the Royal Astronomical Society of Canada. This committee was formed to work with the municipal, provincial, and federal governments as well as with concerned citizens to reduce light pollution and create darker skies for all to enjoy. They encourage people, organizations and governments, to advise each group of the situation at hand and talk to each other and find solutions.

If you want to help as well, iOS users can download two apps that can help one find clearer skies, and help identify light polluted areas. The first one is “Dark Sky Finder”, which is a map of North America, Europe and Australasia that charts out the level of light pollution in certain areas, like Toronto, New York, Sydney, and other cities. The other app is the “Dark Sky Meter”. It allows one to measure the night sky and see how dark it is compared to total darkness. In addition, users can submit the data that they find to the Save Our Stars (SOS) program, which will assist the SOS program in their efforts to chart light pollution in our skies. The links are:

After some time, I decided to call it a night, and brought my telescope into my house.

A few days later, I was thinking about what my priorities should be during this period of the Full Moon. Knowing that the moon and the surrounding light will obstruct my view of the stars, I decided to recommit myself to observing the Moon when it is visible in the sky. When the next clear night comes, I will be there to see the Moon.

Today, I processed a number of images that I took and I achieved this result: 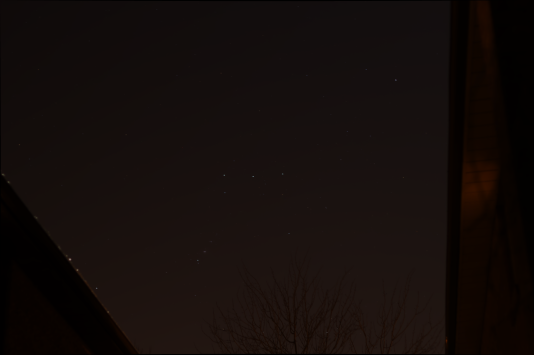 Jupiter through a DSLR Camera. Post-processed