In my previous blog post, I had my heart set on going back out in the bitter -16 C cold to image the Orion Nebula, and I did just that.

I took my telescope to the backyard, where I could get a good view of the constellation Orion. After aligning my telescope to Jupiter, I slewed to the stars that represent Orion’s sword. Looking for the green cloud, I saw all of Orion’s stars again in its unique locations and patterns. It was quite a sight to see.

Eventually I was able to find the faint green cloud I found in a previous astronomy session, and I took a series of long exposure photographs of the Orion Nebula with an ISO of 1600. Unfortunately, It wasn’t properly focused, and I had trouble focusing my telescope. I was only able to get one “good” photo of the Orion Nebula. It’s not that focused, but I did my best. 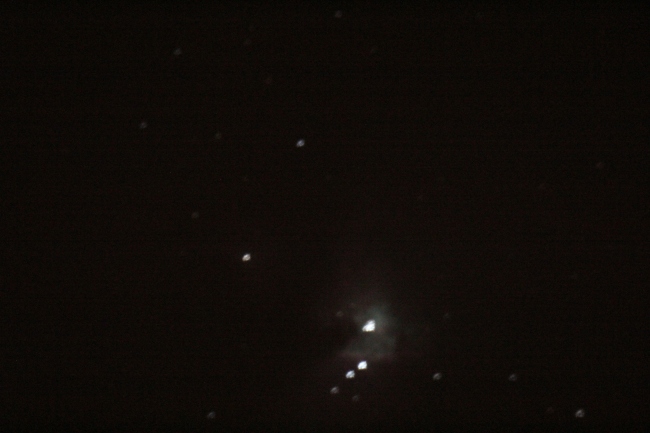 The Orion Nebula. Forgive me, the image is blurry.

After taking a few more long exposure images that were not successful, I decided to call it a night, and go back inside. I brought the eyepiece and camera indoors first, and then the telescope, making sure to use gloves instead of my bare hands. Once indoors, I put all telescopic equipment in its right place, and then warmed up by the fire again.

These two sessions were quite productive. I got my first taste of DSLR astrophotography by taking a two second exposure image of the moon capturing the Old Moon in the New Moon’s Cradle phenomenon. I was able to see Jupiter at close to opposition, despite my failure to image it, and I got my first image of the Orion Nebula. While it is clear I need to work on my astrophotographic skills, I have taken my first steps into it.

Tomorrow will be an early day, for there is another session in the morning. Stay Tuned.